The 2022 British Academy Film Awards, the biggest night in the UK’s film calendar, took place on Sunday 13th March, in person for the first time since the start of the pandemic. Rebel Wilson hosted the ceremony which celebrate the achievements of the nominated and winning films.

Sci-fi epic Dune took the lead this year with 5 wins, including Original Score, Cinematography, Production Design, Sound and Special Visual Effects. Jane Campion’s western The Power of the Dog was awarded 2 BAFTAs including Best Director. No Time to Die actress Lashana Lynch was presented with the EE Rising Star award.

Joanna Scanlan was given the Leading Actress award for for her role as a bereaved Muslim convert in After Love, whilst the Leading Actor award went to Benedict Cumberbatch for this role in The Power of the Dog. 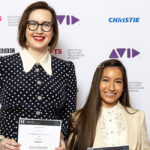